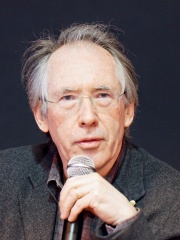 Ian Russell McEwan, (born 21 June 1948) is an English novelist and screenwriter. In 2008, The Times featured him on its list of "The 50 greatest British writers since 1945" and The Daily Telegraph ranked him number 19 in its list of the "100 most powerful people in British culture".McEwan began his career writing sparse, Gothic short stories. His first two novels, The Cement Garden (1978) and The Comfort of Strangers (1981), earned him the nickname "Ian Macabre". Read more on Wikipedia

Ian McEwan is a British novelist and screenwriter. He is best known for his novels, The Cement Garden, Enduring Love, Atonement, and Saturday.