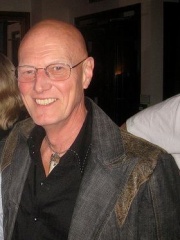 Chris Slade (born Christopher Slade Rees; 30 October 1946) is a Welsh musician, best known for playing for the Australian hard rock band AC/DC. He drummed for the band from 1989 to 1994, performing on their 1990 album The Razors Edge along with their first live album with singer Brian Johnson, AC/DC Live. He returned to the band in February 2015 to replace Phil Rudd for the "Rock or Bust World Tour". Read more on Wikipedia

Since 2007, the English Wikipedia page of Chris Slade has received more than 1,414,360 page views. His biography is available in 21 different languages on Wikipedia making him the 126th most popular musician.