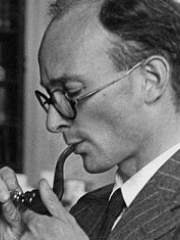 John Langshaw Austin (26 March 1911 – 8 February 1960) was a British philosopher of language and leading proponent of ordinary language philosophy, perhaps best known for developing the theory of speech acts.Austin pointed out that we use language to do things as well as to assert things, and that the utterance of a statement like "I promise to do so-and-so" is best understood as doing something — making a promise — rather than making an assertion about anything. Hence the name of one of his best-known works How to Do Things with Words. Austin, in providing his theory of speech acts, makes a significant challenge to the philosophy of language, far beyond merely elucidating a class of morphological sentence forms that function to do what they name. Read more on Wikipedia

Austin is most famous for his work in the philosophy of language, including his theory of speech acts.

Among philosophers, J. L. Austin ranks 300 out of 1,089. Before him are Félix Guattari, Uriel da Costa, Aenesidemus, Alcmaeon of Croton, Giovanni Gentile, and Jerome of Prague. After him are Ram Mohan Roy, E. H. Carr, Alfred Schütz, Roscellinus, Paramahansa Yogananda, and Nicolai Hartmann.