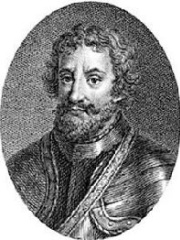 Macbeth (Medieval Gaelic: Mac Bethad mac Findlaích; Modern Scottish Gaelic: MacBheatha mac Fhionnlaigh; English: Macbeth son of Findlay, nicknamed Rí Deircc, "the Red King"; c. 1005 – 15 August 1057) was King of Scots from 1040 until his death. He ruled over the Kingdom of Alba, which covered only a portion of present-day Scotland. Little is known about Macbeth's early life, although he was the son of Findláech of Moray and may have been a grandson of Malcolm II. He became Mormaer of Moray – a semi-autonomous province – in 1032, and was probably responsible for the death of the previous mormaer, Gille Coemgáin. Read more on Wikipedia

Macbeth, king of scotland, is most famous for being a tyrant and murderer.

Page views of Macbeth, King of Scotlands by language

Among politicians, Macbeth, King of Scotland ranks 2,982 out of 15,577. Before him are Idriss Déby, Henri, Prince of Condé, William Ewart Gladstone, Bahram I, Antiochus V Eupator, and Archduchess Elisabeth Franziska of Austria. After him are Souphanouvong, Ismail Qemali, Yazdegerd II, Leopold I, Duke of Austria, Charles Emmanuel IV of Sardinia, and Taksin.