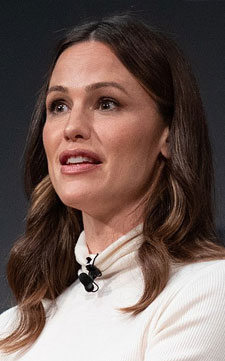 Jennifer Anne Garner (born April 17, 1972) is an American actress and producer. Brought up in Charleston, West Virginia, Garner studied theatre at Denison University and began acting as an understudy for the Roundabout Theatre Company in New York City. She made her screen debut in the television adaptation of Danielle Steel's romance novel Zoya (1995). Read more on Wikipedia

Jezebel
Meanwhile, Jennifer Garner Is On Tour With First Lady Jill Biden
On Thursday, actress Jennifer Garner and First Lady Jill Biden are reportedly taking a trip to Garner’s hometown of Charleston, West Virginia, during which they will tour Arnoldsburg Elementary School and visit a COVID-19 vaccination center located in Capital…
Justice Namaste
Eonline.com
Jennifer Garner Is Focused on Her Kids' "Happiness" as Ben Affleck Spends Time With Jennifer Lopez
One thing is clear: Jennifer Lopez and Ben Affleck's romantic getaway has people "On the Floor." The duo, who were previously engaged in the early 2000s, turned heads and...
Alyssa Morin
Vanity Fair
Ben Affleck Thanks Ex-Wife Jennifer Garner “For All the Good You Do” in Mother's Day Tribute
Ben Affleck, who shares three children with his ex-wife Jennifer Garner, thanked the actress "for all the good you so" adding that they're the “luckiest parents in the world” in a Mother's Day tribute on Instagram.
Emily Kirkpatrick
Cosmopolitan.com
Ben Affleck Posted a Super Sweet Mother's Day Tribute for Jennifer Garner on Instagram
He shared some rare images of their three children, too!
Starr Bowenbank