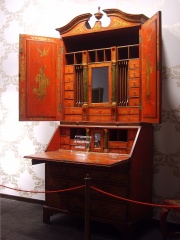 Thomas Chippendale (1718–1779) was a cabinet-maker in London, designing furniture in the mid-Georgian, English Rococo, and Neoclassical styles. In 1754 he published a book of his designs in a trade catalogue titled The Gentleman and Cabinet Maker's Director—the most important collection of furniture designs published in England to that point which created a mass market for furniture—upon which success he became renowned. According to the Victoria and Albert Museum, "so influential were his designs, in Britain and throughout Europe and America, that 'Chippendale' became a shorthand description for any furniture similar to his Director designs".The designs are regarded as representing the current British fashion for furniture of that period and are now reproduced globally. Read more on Wikipedia

Thomas Chippendale was a famous furniture designer from the 18th century. He is most famous for his designs of furniture.

Among DESIGNERS In United Kingdom