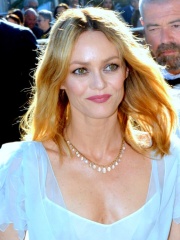 Vanessa Chantal Paradis (French pronunciation: ​[vanɛsa ʃɑ̃tal paʁadi]; born 22 December 1972) is a French singer, model, and actress. Paradis became a child star at the age of 14 with the international success of her single "Joe le taxi" (1987). At age 18, she was awarded France's highest honours as both a singer and an actress with the Prix Romy Schneider and the César Award for Most Promising Actress for Jean-Claude Brisseau's Noce Blanche, as well as the Victoires de la Musique for Best Female Singer for her album Variations sur le même t'aime. Read more on Wikipedia

Among companions, Vanessa Paradis ranks 296 out of 673. Before her are Sophie Amalie of Brunswick-Lüneburg, Marie of Brabant, Queen of France, Christina of Saxony, Eurydice II of Macedon, Philippa of Hainault, and Princess Zorka of Montenegro. After her are Maria of Antioch, Margaret Leijonhufvud, Olivera Despina, Linda McCartney, Queen Rania of Jordan, and Margaret of France, Queen of England and Hungary.