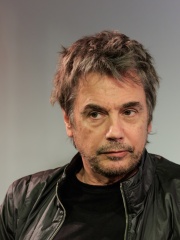 Jean-Michel André Jarre (French: [ʒɑ̃ miʃɛl ɑ̃dʁe ʒaʁ]; born 24 August 1948) is a French composer, performer and record producer. He is a pioneer in the electronic, ambient and new-age genres, and is known for organising outdoor spectacles featuring his music, accompanied by vast laser displays, large projections and fireworks. Jarre was raised in Lyon by his mother and grandparents and trained on the piano. Read more on Wikipedia

Jean-Michel Jarre is most famous for his album Oxygène, which was released in 1976. The album is a mixture of electronic music and classical music.

Among musicians, Jean-Michel Jarre ranks 19 out of 2,662. Before him are Paul McCartney, Leopold Mozart, Madonna, Arcangelo Corelli, Ray Charles, and Brian May. After him are Charlie Watts, George Harrison, Władysław Szpilman, Ringo Starr, Arthur Rubinstein, and Mark Knopfler.