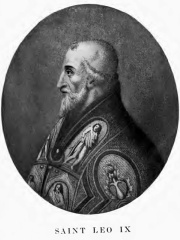 Pope Leo IX (21 June 1002 – 19 April 1054), born Bruno of Egisheim-Dagsburg, was the head of the Catholic Church and ruler of the Papal States from 12 February 1049 to his death in 1054. Leo IX is widely considered the most historically significant German pope of the Middle Ages; he was instrumental in the precipitation of the Great Schism of 1054, considered the turning point in which the Catholic and Eastern Orthodox Churches formally separated. Read more on Wikipedia

Pope Leo IX is most famous for being the first pope to wear the papal tiara in a coronation ceremony. He also called the first ecumenical council of the Catholic Church, where he condemned simony.

Among noblemen, Pope Leo IX ranks 42 out of 843. Before him are Ramesses III, Princess Beatrice of the United Kingdom, Henry IV of England, Otto von Habsburg, Ludovico Sforza, and Naruhito. After him are Alexei Nikolaevich, Tsarevich of Russia, Louis Antoine, Duke of Angoulême, Elizabeth Charlotte, Madame Palatine, Şehzade Mehmed, Herodias, and Philippe II, Duke of Orléans.