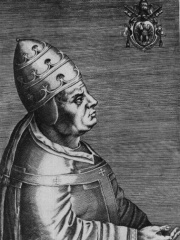 Pope Urban VI (Latin: Urbanus VI; Italian: Urbano VI; c. 1318 – 15 October 1389), born Bartolomeo Prignano (Italian pronunciation: [bartoloˈmɛːo priɲˈɲaːno]), was head of the Catholic Church from 8 April 1378 to his death in October 1389. He was the most recent pope to be elected from outside the College of Cardinals. Read more on Wikipedia

Pope Urban VI was most famous for being the first pope to be elected in a conclave.

Among people born in 1318, Pope Urban VI ranks 1. After him are Margaret, Countess of Tyrol, Yusuf I of Granada, Robert, Prince of Taranto, Albert II, Duke of Mecklenburg, and Eleanor of Woodstock. Among people deceased in 1389, Pope Urban VI ranks 3. Before him are Murad I and Hafez. After him are Miloš Obilić, Dmitry Donskoy, Lazar of Serbia, U of Goryeo, Gülçiçek Hatun, William I, Duke of Bavaria, Chang of Goryeo, Hayam Wuruk, and Albert IV, Duke of Mecklenburg.