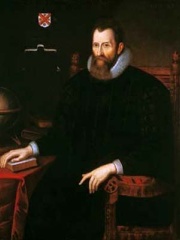 John Napier of Merchiston (; 1 February 1550 – 4 April 1617), nicknamed Marvellous Merchiston, was a Scottish landowner known as a mathematician, physicist, and astronomer. He was the 8th Laird of Merchiston. Read more on Wikipedia

John Napier is most famous for inventing logarithms. He was a Scottish mathematician who was born in 1550 and died in 1617.

Among people born in 1550, John Napier ranks 3. Before him are Safiye Sultan and Charles IX of France. After him are Willem Barentsz, Charles IX of Sweden, Henry I, Duke of Guise, Camillus de Lellis, Edward de Vere, 17th Earl of Oxford, Jang-geum, John Davis, Karin Månsdotter, and Stanislaus Kostka. Among people deceased in 1617, John Napier ranks 3. Before him are Ahmed I and Pocahontas. After him are Rose of Lima, Francisco Suárez, Concino Concini, Emperor Go-Yōzei, Hendrik Goltzius, David Fabricius, 4th Dalai Lama, Fausto Veranzio, and Dorothea of Denmark, Duchess of Brunswick-Lüneburg.