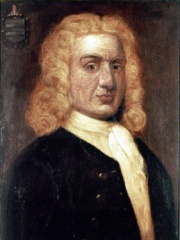 William Kidd, also known as Captain William Kidd or simply Captain Kidd (c. 1655 – 23 May 1701), was a Scottish sea captain who was commissioned as a privateer and had experience as a pirate. He was tried and executed in London in 1701 for murder and piracy. Kidd had captured a French ship, commanded by an English captain, as a prize. Read more on Wikipedia

William Kidd is most famous for being accused of piracy and murder.

Among pirates, William Kidd ranks 11 out of 25. Before him are Alexander Selkirk, Anne Bonny, Calico Jack, Mary Read, D. B. Cooper, and Bartholomew Roberts. After him are Henry Every, Sextus Pompey, Benjamin Hornigold, François l'Olonnais, Charles Vane, and Ching Shih.

Among people born in 1645, William Kidd ranks 3. Before him are Marc-Antoine Charpentier and Johann Ambrosius Bach. After him are Jean de La Bruyère, William Penn, Marguerite Louise d'Orléans, Andreas Werckmeister, Aert de Gelder, Eusebio Kino, Francis I Rákóczi, Louis Jolliet, and Nicolas Lemery. Among people deceased in 1701, William Kidd ranks 3. Before him are Philippe I, Duke of Orléans and James II of England. After him are Madeleine de Scudéry, Louis I, Prince of Monaco, Ernst Rüdiger von Starhemberg, and Anne Hilarion de Tourville.