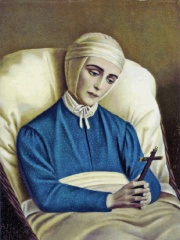 Anne Catherine Emmerich (also Anna Katharina Emmerick; 8 September 1774 – 9 February 1824) was a Roman Catholic Augustinian Canoness Regular of Windesheim, mystic, Marian visionary, ecstatic and stigmatist. She was born in Flamschen, a farming community at Coesfeld, in the Diocese of Münster, Westphalia, Germany, and died at age 49 in Dülmen, where she had been a nun, and later become bedridden. Emmerich experienced visions on the life and passion of Jesus Christ, reputed to be revealed to her by the Blessed Virgin Mary under religious ecstasy.During her bedridden years, a number of well-known figures were inspired to visit her. Read more on Wikipedia

Anne Catherine Emmerich was a German mystic and seer who had visions of the Virgin Mary and the life of Jesus. She is most famous for her account of the life of Jesus, which she wrote in 1820.

Among religious figures, Anne Catherine Emmerich ranks 555 out of 2,238. Before her are Pope Donus, Ibn Majah, Pope Benedict V, Pope Agapetus I, Paul the Deacon, and Ibn Hisham. After her are Rabanus Maurus, Pope Marcellinus, Clotilde, John of Capistrano, Justin Martyr, and Pope Victor II.