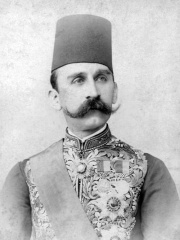 Sultan Hussein Kamel (Arabic: السلطان حسين كامل‎; November 1853 – 9 October 1917) was the Sultan of Egypt from 19 December 1914 to 9 October 1917, during the British protectorate over Egypt. He was the first person to hold the title of Sultan of Egypt since the killing of Sultan Tuman II by the Ottomans in 1517 following their conquest of Egypt. Hussein Kamel was the second son of Khedive Ismail Pasha, who ruled Egypt from 1863 to 1879. Read more on Wikipedia

Hussein Kamel was the Minister of Industry and Military Production under Saddam Hussein. He defected from Iraq in 1995 and became a key witness for the U.N. weapons inspectors.

Page views of Hussein Kamel of Egypts by language

Among politicians, Hussein Kamel of Egypt ranks 4,251 out of 15,710. Before him are Joseph Chamberlain, Wolfram Sievers, Catherine of Saxe-Lauenburg, Arnold Gehlen, Utu-hengal, and Sophia. After him are Khalifa bin Salman Al Khalifa, Clementine Churchill, William II of Württemberg, Levon Ter-Petrosyan, Köprülüzade Fazıl Mustafa Pasha, and Harpalus.