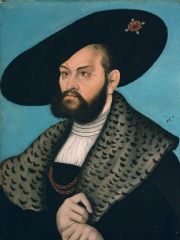 Albert of Prussia (German: Albrecht von Preussen; 17 May 1490 – 20 March 1568) was a German prince who was the 37th Grand Master of the Teutonic Knights, who after converting to Lutheranism, became the first ruler of the Duchy of Prussia, the secularized state that emerged from the former Monastic State of the Teutonic Knights. Albert was the first European ruler to establish Lutheranism, and thus Protestantism, as the official state religion of his lands. Read more on Wikipedia

Albert, Duke of Prussia was the husband of Queen Victoria of England. He was a member of the House of Hohenzollern and was the son of Prince Albert of Prussia and Princess Marie of Saxe-Weimar-Eisenach.

Page views of Albert, Duke of Prussias by language

Among noblemen, Albert, Duke of Prussia ranks 111 out of 842. Before him are Prince Andrew, Duke of York, Queen Fabiola of Belgium, Hugh the Great, Pyotr Wrangel, Cleopatra of Macedon, and Élisabeth of France. After him are Princess Margaret of Connaught, Grand Duchess Olga Alexandrovna of Russia, Giovanni di Bicci de' Medici, Felipe VI of Spain, Haakon VI of Norway, and Robert Curthose.

Among people born in 1490, Albert, Duke of Prussia ranks 2. Before him is Mimar Sinan. After him are Charles III, Duke of Bourbon, Adrian Willaert, Olaus Magnus, Huáscar, Albert of Brandenburg, Vittoria Colonna, Ebussuud Efendi, Florian Geyer, Juan Ginés de Sepúlveda, and Francesco Maria I della Rovere, Duke of Urbino. Among people deceased in 1568, Albert, Duke of Prussia ranks 4. Before him are Elisabeth of Valois, Carlos, Prince of Asturias, and Jean Parisot de Valette. After him are Lamoral, Count of Egmont, Jacques Arcadelt, Stanislaus Kostka, Andrés de Urdaneta, Sophie of Pomerania, Philip de Montmorency, Count of Horn, Henry V, Duke of Brunswick-Lüneburg, and Christoph, Duke of Württemberg.