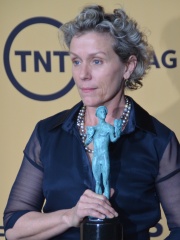 Frances Louise McDormand (born Cynthia Ann Smith; June 23, 1957) is an American actress and producer. Known for her portrayals of quirky, headstrong characters, she has garnered numerous accolades throughout her career, including a Tony Award, two Primetime Emmy Awards, and three Academy Awards for her acting, in addition to a fourth Academy Award as producer, making her one of the few performers to achieve the "Triple Crown of Acting". Additionally, she has received two Golden Globe Awards, three British Academy Film Awards, and four Screen Actors Guild Awards. Read more on Wikipedia

Frances McDormand is most famous for her role as a pregnant police officer in the film Fargo.