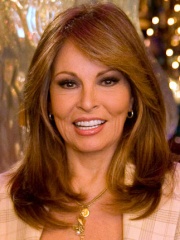 Raquel Welch (born Jo Raquel Tejada; September 5, 1940) is an American actress and singer. She first won attention for her role in Fantastic Voyage (1966), after which she won a contract with 20th Century Fox. They lent her contract to the British studio Hammer Film Productions, for whom she made One Million Years B.C. (1966). Read more on Wikipedia

Since 2007, the English Wikipedia page of Raquel Welch has received more than 6,782,747 page views. Her biography is available in 46 different languages on Wikipedia making her the 450th most popular actor.