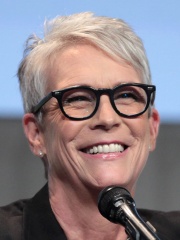 Jamie Lee Curtis (born November 22, 1958) is an American actress, producer, children's author, and activist. Known for her performances in film and television, she is one of the most prolific actors of the horror and slasher genres and has been labeled as a scream queen. Curtis has received multiple accolades, including a British Academy Film Award and two Golden Globe Awards, as well as nominations for an Academy Award, an Emmy Award, a Grammy Award, and three Screen Actors Guild Awards. Read more on Wikipedia

Jamie Lee Curtis is most famous for her role as Laurie Strode in the 1978 horror film Halloween. She also starred in the films Trading Places, A Fish Called Wanda, and Freaky Friday.