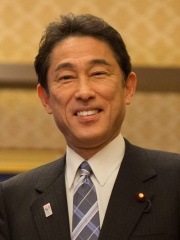 Fumio Kishida (岸田 文雄, Kishida Fumio, born 29 July 1957) is a Japanese politician serving as Prime Minister of Japan and president of the Liberal Democratic Party (LDP) since 2021. A member of the House of Representatives, he previously served as Minister for Foreign Affairs from 2012 to 2017 and as acting Minister of Defense in 2017. Read more on Wikipedia

Among politicians, Fumio Kishida ranks 1,885 out of 15,577. Before him are Ibrahim Rugova, Martin of Aragon, Aşub Sultan, Kęstutis, Thomas Bach, and Alfonso XI of Castile. After him are Justin II, William II of Sicily, Sancho II of Castile and León, Tabaré Vázquez, Nur Muhammad Taraki, and Isma'il Pasha.