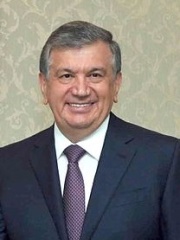 Shavkat Miromonovich Mirziyoyev (Uzbek Latin: Shavkat Miromonovich (Miromon o‘g‘li) Mirziyoyev, Uzbek Cyrillic: Шавкат Миромонович (Миромон ўғли) Мирзиёев, [ʃɑfˈkɑt mirɔˈmɔnəvʲit͡ɕ (mirɔˈmɔn œɣˈlə) mirziˈjɔjɪf] ; born 24 July 1957) is an Uzbek politician who has served as President of Uzbekistan and Supreme Commander-in-Chief of the Armed Forces of Uzbekistan since 2016. Previously he was the Prime Minister of Uzbekistan from 2003 to 2016. Following the death of President Islam Karimov, he was appointed by the Supreme Assembly as interim president of Uzbekistan on 8 September 2016. Read more on Wikipedia

Since 2007, the English Wikipedia page of Shavkat Mirziyoyev has received more than 653,110 page views. His biography is available in 61 different languages on Wikipedia making him the 3,562nd most popular politician.

Among politicians, Shavkat Mirziyoyev ranks 3,540 out of 14,801. Before him are Peter I of Aragon and Pamplona, Empress Jitō, Peter I, Duke of Bourbon, Prince Arthur, Duke of Connaught and Strathearn, Arame of Urartu, and Bernabò Visconti. After him are Simeon of Moscow, Pribina, Federico II Gonzaga, Duke of Mantua, Gim Yu-sin, Theroigne de Mericourt, and Go of Balhae.