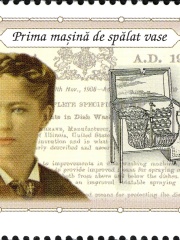 Josephine Garis Cochran (later Cochrane; March 8, 1839 – August 3, 1913) was an American inventor who was the inventor of the first commercially successful automatic dishwasher, which she designed in the shed behind her home; she then constructed it engaging the assistance of mechanic George Butters, who became one of her first employees. She is claimed to have said "If nobody else is going to invent a dish washing machine, I'll do it myself!" Once her patent issued on 28 December 1886, she founded Garis-Cochrane Manufacturing Company to manufacture her machines. Cochrane showed her new machine at the World's Columbian Exposition in Chicago in 1893 where nine Garis-Cochran washers were installed in the restaurants and pavilions of the fair and was met with interest from restaurants and hotels, where hot water access was not an issue. Read more on Wikipedia

Josephine Cochrane is most famous for inventing the dishwasher. She invented the dishwasher because she was tired of washing dishes by hand.