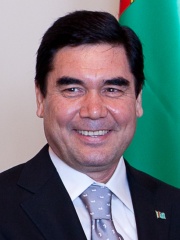 Gurbanguly Malikgulyyevich Berdimuhamedov (Turkmen: Gurbanguly Mälikgulyýewiç Berdimuhamedow; Turkmen pronunciation: [ɢʊɾbɑnʁʊˈlɯ mælɪk'ɢʊlɯjɛβɪtʃ bɛɾdɯmʊxɑmɛˈdoβ]; born 29 June 1957), or Gurbanguly Malikgulyevich Berdymukhamedov, is a Turkmen politician who has been serving as the president of Turkmenistan since February 2007. A dentist by profession, Berdimuhamedov served in the government under President Saparmurat Niyazov as Minister of Health beginning in 1997 and as Vice-President beginning in 2001. He became Acting President following Niyazov's death on 21 December 2006 and subsequently won the February 2007 presidential election. Read more on Wikipedia

Gurbanguly Berdimuhamedow is the president of Turkmenistan. He was elected in 2007 and re-elected in 2012. He is most famous for his authoritarian rule and for his crackdown on dissent.

Among politicians, Gurbanguly Berdimuhamedow ranks 1,868 out of 15,710. Before him are Laurent-Désiré Kabila, Agostinho Neto, Ashurnasirpal II, Hotepsekhemwy, Tiglath-Pileser I, and Archduke Maximilian Francis of Austria. After him are Julia Drusilla, Michael the Brave, Mohammed Daoud Khan, Francis, Duke of Anjou, Dihya, and Sima Zhao.

Among POLITICIANS In Turkmenistan

Among politicians born in Turkmenistan, Gurbanguly Berdimuhamedow ranks 3. Before him are Saparmurat Niyazov (1940) and Jalal ad-Din Mingburnu (1199). After him are Al-Muqanna (800), Andronikos I of Trebizond (1101), Dmitri Shepilov (1905), and Muhammetnazar Gapurow (1922).