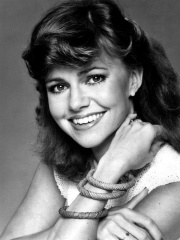 Sally Margaret Field (born November 6, 1946) is an American actress. She has received many awards and nominations, including two Academy Awards, three Primetime Emmy Awards, two Golden Globe Awards, a Screen Actors Guild Award, a Cannes Film Festival Award for Best Actress, and nominations for a Tony Award and for two British Academy Film Awards. Field began her career on television, starring in the comedies Gidget (1965–1966), The Flying Nun (1967–1970), and The Girl with Something Extra (1973–1974). Read more on Wikipedia

Sally Field is most famous for her role as a mother in the television series, "Gidget."