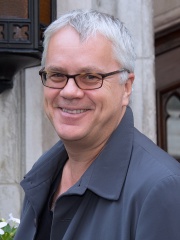 Timothy Francis Robbins (born October 16, 1958) is an American actor and filmmaker. He is known for portraying Andy Dufresne in the film The Shawshank Redemption (1994), and has won an Academy Award and two Golden Globe Awards for his roles in the films The Player (1992) and Mystic River (2003). Robbins's other roles include starring as Lt. Samuel "Merlin" Wells in Top Gun (1986), Nuke LaLoosh in Bull Durham (1988), Erik in Erik the Viking (1989), Ed Walters in I.Q. Read more on Wikipedia

Tim Robbins is an American actor, director, screenwriter, producer, author, and activist. He is best known for his roles as Andy Dufresne in The Shawshank Redemption, Jacob Singer in The Player, and as Dave Brown in Mystic River.