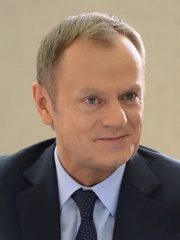 Donald Franciszek Tusk ( TUUSK, Polish: [ˈdɔnalt fraɲˈt͡ɕiʂɛk ˈtusk] (listen); born 22 April 1957) is a Polish politician who was President of the European Council from 2014 to 2019. He served as the 14th prime minister of Poland from 2007 to 2014 and was a co-founder and chairman of the Civic Platform (Platforma Obywatelska) political party. On 20 November 2019, Tusk was elected as the president of the European People's Party (EPP), Europe's largest transnational political party.Tusk has been involved in Polish politics since the early 1990s, having founded several political parties and held elected office almost continuously since 1991. Read more on Wikipedia

Donald Tusk is the President of the European Council. He is most famous for being the Prime Minister of Poland from 2007 to 2014.

Among politicians, Donald Tusk ranks 2,338 out of 15,710. Before him are Robert, King of Naples, Maria Ludovika of Austria-Este, Prajadhipok, Mieszko I of Poland, Juscelino Kubitschek, and Emperor Zhao of Han. After him are Ambrogio Spinola, 1st Marquess of Balbases, Nynetjer, Vojislav Koštunica, Omar Bongo, Hermann von Salza, and Eudokia Makrembolitissa.