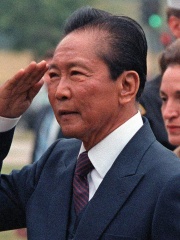 Ferdinand Emmanuel Edralin Marcos Sr. (UK: MAR-koss, US: -⁠kohss, -⁠kawss, Tagalog: [ˈmaɾkɔs]; September 11, 1917 – September 28, 1989) was a Filipino politician, lawyer, dictator, and kleptocrat who was the 10th president of the Philippines from 1965 to 1986. He ruled under martial law from 1972 until 1981 and kept most of his martial law powers until he was deposed in 1986, branding his rule as "constitutional authoritarianism": 414  under his Kilusang Bagong Lipunan (New Society Movement). Read more on Wikipedia

Ferdinand Marcos was the president of the Philippines from 1965 to 1986. Marcos is most famous for his declaration of Martial Law in 1972 and his ousting from power in 1986.

Among politicians, Ferdinand Marcos ranks 2,472 out of 15,577. Before him are Anne Marie Louise d'Orléans, Duchess of Montpensier, Abe no Seimei, Pierre Trudeau, Ezer Weizman, Milton Obote, and George William, Elector of Brandenburg. After him are Weneg, Erich Mielke, Isabella Jagiellon, Emperor Suzong of Tang, John VII Palaiologos, and Haakon IV of Norway.