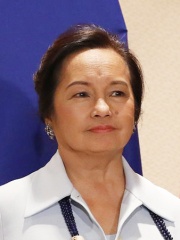 Maria Gloria Macaraeg Macapagal Arroyo (Tagalog: [ˈɡloɾja makapaˈɡal ɐˈɾɔjɔ], born April 5, 1947), often referred to by her initials GMA, is a Filipino academic and politician serving as one of the House Deputy Speakers since 2022, and previously from 2016 to 2017. She previously served as the 14th president of the Philippines from 2001 until 2010. She is the longest serving president of the Philippines since Ferdinand Marcos. Read more on Wikipedia

Among politicians, Gloria Macapagal Arroyo ranks 8,119 out of 15,577. Before her are Princess Françoise of Orléans, Mstislav Mstislavich, Baldwin II, Count of Hainaut, Henry Howard, Earl of Surrey, Demetrius the Fair, and Henry Pelham. After her are Nicolas Henri, Duke of Orléans, Louis III, Elector Palatine, Bongsang of Goguryeo, Foday Sankoh, Adelaide of Hungary, and Helen of Anjou.