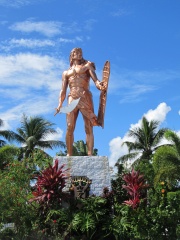 Lapulapu or Lapu-Lapu, whose name was first recorded as Çilapulapu, was a datu (chief) of Mactan in the Visayas in the Philippines. He is best known for the Battle of Mactan that happened at dawn on April 27, 1521, where he and his warriors defeated the Spanish forces led by Portuguese explorer Ferdinand Magellan and his native allies Rajah Humabon and Datu Zula. Magellan's death ended his voyage of circumnavigation and delayed the Spanish occupation of the islands by over forty years until the expedition of Miguel López de Legazpi in 1564. Read more on Wikipedia

Lapu-lapu is most famous for being the first person to defeat Ferdinand Magellan in battle.

Page views of Lapu-Lapus by language

Among politicians, Lapu-Lapu ranks 3,020 out of 15,577. Before him are George Vella, Giuseppe Guarneri, Gnaeus Domitius Corbulo, Princess Charlotte of Wales, Seongjong of Goryeo, and Empress Wanrong. After him are Anthony of Saxony, Vladimír Mečiar, Eric II of Denmark, Narseh, Sandro Pertini, and Hadım Suleiman Pasha.