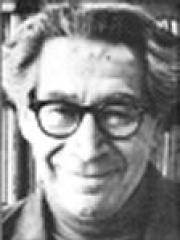 Leon Festinger (8 May 1919 – 11 February 1989) was an American social psychologist, perhaps best known for cognitive dissonance and social comparison theory. His theories and research are credited with renouncing the previously dominant behaviorist view of social psychology by demonstrating the inadequacy of stimulus-response conditioning accounts of human behavior. Festinger is also credited with advancing the use of laboratory experimentation in social psychology, although he simultaneously stressed the importance of studying real-life situations, a principle he perhaps most famously practiced when personally infiltrating a doomsday cult. Read more on Wikipedia

Leon Festinger is most famous for his cognitive dissonance theory. He proposed that when people are confronted with information that conflicts with their beliefs, they will change their beliefs to match the new information.