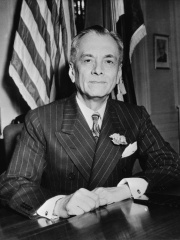 Manuel Luis Quezon y Molina, (Spanish: [maˈnwel ˈlwis kesoɲ], Tagalog: [maˈnwel ˈluwis kɛson]; 19 August 1878 – 1 August 1944), also referred to by his initials MLQ, was a Filipino statesman, soldier and politician who served as president of the Commonwealth of the Philippines from 1935 to 1944. He was the first Filipino to head a government of the entire Philippines (as opposed to the government of previous Philippine states), and is considered to have been the second president of the Philippines, after Emilio Aguinaldo (1899–1901), whom Quezon defeated in the 1935 presidential election. During his presidency, Quezon tackled the problem of landless peasants in the countryside. Read more on Wikipedia

Among politicians, Manuel L. Quezon ranks 7,996 out of 15,710. Before him are Hethum I, King of Armenia, Princess Hilda of Nassau, Arturo Umberto Illia, Đỗ Mười, Charles Augustus, Hereditary Grand Duke of Saxe-Weimar-Eisenach, and François Certain de Canrobert. After him are Humberto Delgado, Édouard Philippe, Margravine Elisabeth Sophie of Brandenburg, Sigismund, Duke of Bavaria, Vyacheslav Kebich, and Agesilaus I.