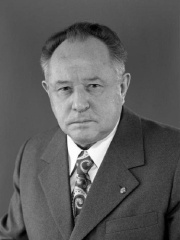 Erich Fritz Emil Mielke (German: [ˈeːʁɪç ˈmiːlkə]; 28 December 1907 – 21 May 2000) was a German communist official who served as head of the East German Ministry for State Security (Ministerium für Staatsicherheit – MfS), better known as the Stasi, from 1957 until shortly after the fall of the Berlin Wall in 1989. A native of Berlin and a second-generation member of the Communist Party of Germany, Mielke was one of two triggermen in the 1931 murders of Berlin Police captains Paul Anlauf and Franz Lenck. After learning that a witness had survived, Mielke escaped arrest by fleeing to the Soviet Union, where the NKVD recruited him. Read more on Wikipedia

Among politicians, Erich Mielke ranks 2,716 out of 15,710. Before him are Sweyn III of Denmark, Abdullah Yusuf Azzam, Friedrich Ludwig Jahn, Huáscar, Stefan Dečanski, and Christine of France. After him are Alfonso III of Aragon, Mentuhotep IV, Leopold I, Duke of Austria, Emperor Ming of Han, Charles III, Duke of Lorraine, and Bindusara.