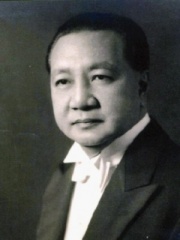 Elpidío Rivera Quiríno (born Elpidío Quiríno y Rivera; November 16, 1890 – February 29, 1956) was a Filipino politician of ethnic Ilocano descent who served as the sixth President of the Philippines from 1948 to 1953. A lawyer by profession, Quiríno entered politics when he became a representative of Ilocos Sur from 1919 to 1925. He was then elected as senator from 1925–1931. Read more on Wikipedia

Since 2007, the English Wikipedia page of Elpidio Quirino has received more than 729,043 page views. His biography is available in 37 different languages on Wikipedia making him the 7,402nd most popular politician.

Among politicians, Elpidio Quirino ranks 7,359 out of 14,801. Before him are An Shigao, Osorkon III, Neferkare Tereru, Ferdinando Gonzaga, Duke of Mantua, Mutimir of Serbia, and Alfonso López Michelsen. After him are Charles IV, Duke of Alençon, Trần Đức Lương, Jean Chrétien, Princess Caroline Louise of Hesse-Darmstadt, Lajin, and Alexander of Pherae.