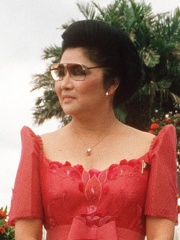 Imelda Romualdez Marcos (Tagalog: [ɪˈmelda ˈmaɾkɔs]; born Imelda Remedios Visitacion Trinidad Romualdez; July 2, 1929) is a Filipina politician and convicted criminal who was First Lady of the Philippines for 20 years, during which she and her husband Ferdinand Marcos stole billions: 176  from the Filipino people, amassing a personal fortune estimated to have been worth US$5 billion to US$10 billion by the time they were deposed in 1986. By 2018, about $3.6 billion of this had been recovered by the Philippine government, either through compromise deals or sequestration cases.She married Marcos in 1954 and became First Lady in 1965 when he became President of the Philippines. She ordered the construction of many grandiose architectural projects, using public funds and "in impossibly short order" – a propaganda practice, which eventually came to be known as her "edifice complex."The People Power Revolution in February 1986 unseated the Marcoses and forced the family into exile in Hawaii. Read more on Wikipedia

Imelda Marcos is most famous for being the wife of the former president of the Philippines, Ferdinand Marcos. After he was removed from power in 1986, she was accused of corruption and embezzlement.

Among companions, Imelda Marcos ranks 212 out of 687. Before her are Cecilia Bowes-Lyon, Countess of Strathmore and Kinghorne, Maria Anna of Austria, Philippa of Lancaster, Michelle Obama, Princess Wilhelmine of Baden, and Louise of the Netherlands. After her are Abigail, Emma of Normandy, Eleanor of Castile, Elisabeth Christine of Brunswick-Wolfenbüttel-Bevern, Constance of Sicily, Queen of Aragon, and Hoelun.

Among COMPANIONS In Philippines