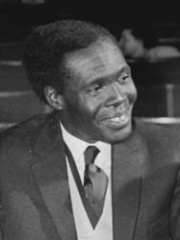 Apollo Milton Obote (28 December 1925 – 10 October 2005) was a Ugandan political leader who led Uganda to independence from British colonial rule in 1962. Following the nation's independence, he served as prime minister of Uganda from 1962 to 1966 and the second president of Uganda from 1966 to 1971, then again from 1980 to 1985. He founded the Uganda People's Congress (UPC) in 1960, which played a key role in securing Uganda's independence from the United Kingdom in 1962. Read more on Wikipedia

Milton Obote was the first President of Uganda from 1962 to 1971 and from 1980 to 1985. He is most famous for overthrowing the Kabaka of Buganda, the traditional ruler of the Baganda people, and abolishing the Ugandan monarchy.

Among politicians, Milton Obote ranks 2,470 out of 15,577. Before him are Manuel Godoy, John William Friso, Prince of Orange, Anne Marie Louise d'Orléans, Duchess of Montpensier, Abe no Seimei, Pierre Trudeau, and Ezer Weizman. After him are George William, Elector of Brandenburg, Ferdinand Marcos, Weneg, Erich Mielke, Isabella Jagiellon, and Emperor Suzong of Tang.

Among POLITICIANS In Uganda