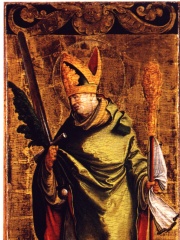 Cyprian ( SIP-ree-ən; Latin: Thaschus Caecilius Cyprianus; c. 210 – September 14, 258 AD) was bishop of Carthage and a notable early Christian writer of Berber descent, many of whose Latin works are extant. He is also recognised as a saint in the Christian churches. Read more on Wikipedia

Since 2007, the English Wikipedia page of Cyprian has received more than 502,078 page views. His biography is available in 49 different languages on Wikipedia (up from 47 in 2019). Cyprian is the 227th most popular religious figure (down from 220th in 2019), the 7th most popular biography from Tunisia and the most popular Tunisian Religious Figure.

Cyprian was a Christian theologian and bishop of Carthage from 248-258. He was martyred in 258 during the persecution of Christians. Cyprian is most famous for his writings on the unity of the Church and on the primacy of the Roman Pontiff.

Page views of Cyprians by language

Among religious figures, Cyprian ranks 227 out of 2,272. Before him are Pope Siricius, Longinus, Pope Sixtus I, Maximilian Kolbe, Pope Alexander III, and Pope Urban III. After him are John of the Cross, Saint Veronica, Pope Felix I, Ubba, Pope Benedict XIII, and Amos.

Among RELIGIOUS FIGURES In Tunisia