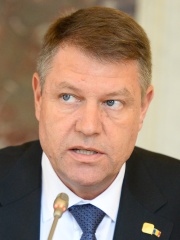 Klaus Werner Iohannis (Romanian pronunciation: [ˈkla.us joˈhanis], German: [ˈkʰlaʊ̯s joˈhanɪs]; also spelled Johannis; born 13 June 1959) is the president of Romania. He became leader of the National Liberal Party (PNL) in 2014, after having served as leader of the Democratic Forum of Germans in Romania (FDGR/DFDR) from 2002 to 2013. Read more on Wikipedia

Among politicians, Klaus Iohannis ranks 2,420 out of 15,710. Before him are Admetus, Stefan Milutin, Bonne of Luxembourg, Prince Carl, Duke of Västergötland, Ladislaus II of Hungary, and Houari Boumédiène. After him are Sirikit, George William, Elector of Brandenburg, Emperor Nakamikado, Jacques Pierre Brissot, John George I, Elector of Saxony, and Kenneth MacAlpin.