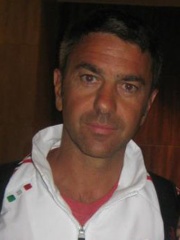 Alessandro "Billy" Costacurta (Italian pronunciation: [alesˈsandro ˈbilli ˌkɔstaˈkurta]; born 24 April 1966) is an Italian football pundit, manager and a former professional defender, who usually played as a centre back. Throughout his club career, Costacurta spent over twenty years with AC Milan between 1986 and 2007, as well as a brief season-long spell on loan at Monza. He is best known for his role alongside Franco Baresi, Paolo Maldini, and Mauro Tassotti, forming one of the greatest defences in Serie A and European football during the late 1980s and 1990s, under the success of managers Arrigo Sacchi and Fabio Capello. Read more on Wikipedia