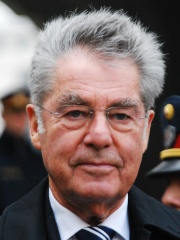 Heinz Fischer GColIH OMRI RSerafO GCollSE (German pronunciation: [haɪnts ˈfɪʃɐ] (listen); born 9 October 1938 in Graz, Styria) is a former Austrian politician. He took office as President of Austria on 8 July 2004 and was re-elected for a second and last term on 25 April 2010, leaving office on 8 July 2016. Fischer previously served as minister of science from 1983 to 1987 and as president of the National Council of Austria from 1990 to 2002. Read more on Wikipedia

Heinz Fischer is the current president of Austria. He was elected in 2004 and re-elected in 2010.

Among politicians, Heinz Fischer ranks 2,026 out of 15,710. Before him are Aníbal Cavaco Silva, Odilo Globočnik, Lucilla, Chiang Ching-kuo, Pang Tong, and Öljaitü. After him are Tamar, Urraca of León, Emperor Daizong of Tang, Rudolph of France, Wen Jiabao, and Louis the Younger.