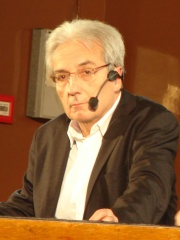 Albert Fert (French: [albɛʁ fɛʁ]; born 7 March 1938) is a French physicist and one of the discoverers of giant magnetoresistance which brought about a breakthrough in gigabyte hard disks. Currently, he is an emeritus professor at Paris-Saclay University in Orsay, scientific director of a joint laboratory (Unité mixte de recherche) between the Centre national de la recherche scientifique (National Scientific Research Centre) and Thales Group, and adjunct professor at Michigan State University. Read more on Wikipedia

Albert Fert is most famous for his work in the field of solid state physics. He was awarded the Nobel Prize in Physics in 2007 for his work on the physical properties of materials.