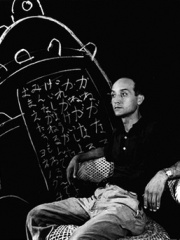 Isamu Noguchi (野口 勇, Noguchi Isamu, November 17, 1904 – December 30, 1988) was a Japanese American artist and landscape architect whose artistic career spanned six decades, from the 1920s onward. Known for his sculpture and public artworks, Noguchi also designed stage sets for various Martha Graham productions, and several mass-produced lamps and furniture pieces, some of which are still manufactured and sold. In 1947, Noguchi began a collaboration with the Herman Miller company, when he joined with George Nelson, Paul László and Charles Eames to produce a catalog containing what is often considered to be the most influential body of modern furniture ever produced, including the iconic Noguchi table which remains in production today. Read more on Wikipedia

Since 2007, the English Wikipedia page of Isamu Noguchi has received more than 949,195 page views. His biography is available in 23 different languages on Wikipedia making him the 52nd most popular sculptor.

Among SCULPTORS In United States