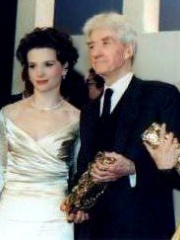 Alain Resnais (French: [alɛ̃ ʁɛnɛ]; 3 June 1922 – 1 March 2014) was a French film director and screenwriter whose career extended over more than six decades. After training as a film editor in the mid-1940s, he went on to direct a number of short films which included Night and Fog (1956), an influential documentary about the Nazi concentration camps.Resnais began making feature films in the late 1950s and consolidated his early reputation with Hiroshima mon amour (1959), Last Year at Marienbad (1961), and Muriel (1963), all of which adopted unconventional narrative techniques to deal with themes of troubled memory and the imagined past. These films were contemporary with, and associated with, the French New Wave (la nouvelle vague), though Resnais did not regard himself as being fully part of that movement. Read more on Wikipedia

Alain Resnais is most famous for his film "Hiroshima Mon Amour."