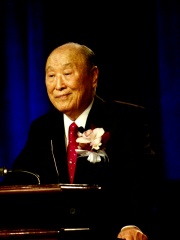 Sun Myung Moon (Korean: 문선명; Hanja: 文鮮明; born Yong Myung Moon; 6 January 1920 – 3 September 2012) was a Korean religious leader, also known for his business ventures and support for political causes. A messiah claimant, he was the founder of the Unification movement (members of which considered him and his wife Hak Ja Han to be their "True Parents"), and of its widely noted "Blessing" or mass wedding ceremony, and the author of its unique theology the Divine Principle. He was an anti-communist and an advocate for Korean reunification, for which he was recognized by the governments of both North and South Korea. Read more on Wikipedia

Sun Myung Moon is most famous for being the founder of the Unification Church, a Christian sect that believes in the unification of all religions.

Among religious figures, Sun Myung Moon ranks 696 out of 2,272. Before him are Gemma Galgani, Emma Morano, Jacob Frank, Al-Nasa'i, Adnan, and Apollinaris of Ravenna. After him are Brother Roger, Abdullah ibn Saba', William Tyndale, Gertrude the Great, Nikephoros I of Constantinople, and Patriarch Kirill of Moscow.

Among RELIGIOUS FIGURES In North Korea