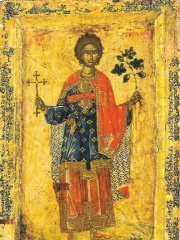 Saint Tryphon of Campsada (Greek: Τρύφων; also spelled Trypho, Trifon, Triphon) was a 3rd-century Christian saint. He is venerated by the Roman Catholic and Eastern Orthodox churches as a great martyr and holy unmercenary. Saint Tryphon was formerly celebrated jointly with Saints Respicius and Nympha on 10 November in the liturgical calendar of the Latin Church from the eleventh century until the twentieth. Saint Tryphon continues to be celebrated (separately) on 1 February [O.S. Read more on Wikipedia

Among religious figures, Tryphon, Respicius, and Nympha ranks 688 out of 2,272. Before him are Chaitanya Mahaprabhu, Pope Shenouda III of Alexandria, Hillel the Elder, Piruz Nahavandi, Antipope Anacletus II, and Robert of Molesme. After him are Joan Enric Vives Sicília, Gemma Galgani, Emma Morano, Jacob Frank, Al-Nasa'i, and Adnan.