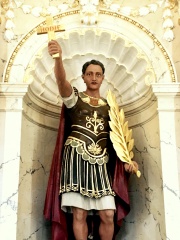 Expeditus (died 303) also known as Expedite, was said to have been a Roman centurion in Armenia who was martyred around April 303 in what is now Turkey, for converting to Christianity. Read more on Wikipedia

Since 2007, the English Wikipedia page of Expeditus has received more than 366,209 page views. His biography is available in 20 different languages on Wikipedia. Expeditus is the 745th most popular religious figure (down from 727th in 2019), the 352nd most popular biography from Turkey (down from 342nd in 2019) and the 53rd most popular Turkish Religious Figure.

Expeditus is most famous for being a saint who was martyred in the 3rd century.

Page views of Expedituses by language

Among religious figures, Expeditus ranks 745 out of 2,238. Before him are Euphemia, Ilia II of Georgia, Raymond of Penyafort, Willibrord, Itzhak Stern, and Antipope Boniface VII. After him are Thaïs, Angela of Foligno, Albert of Brandenburg, Brendan, Arnulf of Metz, and Mary of Bethany.

Among people born in 300, Expeditus ranks 16. Before him are Vincent of Saragossa, Macarius of Egypt, Vātsyāyana, Asanga, Erasmus of Formia, and Narseh. After him are Adrian and Natalia of Nicomedia, Hormizd II, Zeno of Verona, Saturnin, Cyriacus, and Bahram III. Among people deceased in 303, Expeditus ranks 6. Before him are Saint George, Saint Pantaleon, Vitus, Erasmus of Formia, and Cao Huan. After him are Cyriacus, Eulalia of Barcelona, Saint Chrysogonus, Fermin, Cassian of Imola, and Agathius.