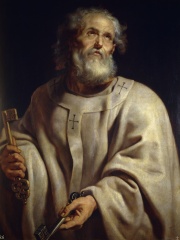 Saint Peter (died between AD 64 and 68), also known as Peter the Apostle, Peter the Rock, Simon Peter, Simeon, Simon, or Cephas, was one of the Twelve Apostles of Jesus Christ and one of the first leaders of the early Christian Church. According to Christian tradition, Peter was crucified in Rome under Emperor Nero. The ancient Christian churches all venerate Peter as a major saint and as the founder of the Church of Antioch and the Church of Rome, but they differ in their attitudes regarding the authority of his successors. Read more on Wikipedia

Saint Peter is most famous for being the first pope and for being crucified upside down.

Among religious figures, Saint Peter ranks 10 out of 2,238. Before him are Martin Luther, Abraham, Mary, mother of Jesus, Pope Francis, Paul the Apostle, and Solomon. After him are John the Baptist, Zoroaster, Saint Nicholas, Jacob, Pope John Paul II, and Francis of Assisi.