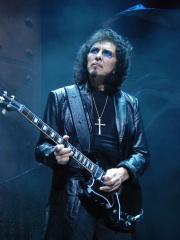 Anthony Frank Iommi () (born 19 February 1948) is a British musician. He co-founded the pioneering heavy metal band Black Sabbath, and was the band's guitarist, leader and primary composer and sole continuous member for nearly five decades. Iommi was ranked number 25 in Rolling Stone magazine's list of the "100 Greatest Guitarists of All Time".On his last day of work in a sheet metal factory, as a teenager, Iommi lost the tips of the middle and ring fingers of his right hand in an accident, an event which crucially impacted his playing style. Read more on Wikipedia

Tony Iommi is most famous for being the guitarist and songwriter for Black Sabbath.