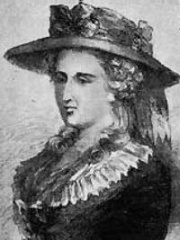 Ann Radcliffe (née Ward; 9 July 1764 – 7 February 1823) was an English novelist and a pioneer of Gothic fiction. Her technique of explaining apparently supernatural elements in her novels has been credited with gaining respectability for Gothic fiction in the 1790s. Radcliffe was the most popular writer of her day and almost universally admired; contemporary critics called her the mighty enchantress and the Shakespeare of romance-writers, and her popularity continued through the 19th century. Read more on Wikipedia

Ann Radcliffe was a British author, best known for her novel The Mysteries of Udolpho.

Among writers, Ann Radcliffe ranks 745 out of 5,755. Before her are Cornelia, mother of the Gracchi, Émile Verhaeren, Christa Wolf, Natalia Ginzburg, Nikolai Ostrovsky, and Jamal Khashoggi. After her are Aelia Eudocia, Joseph Murphy, Su Shi, Zosimus, Olga Tokarczuk, and Solomon Northup.