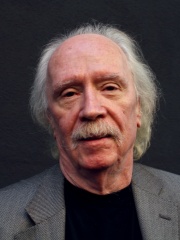 John Howard Carpenter (born January 16, 1948) is an American film director, producer, actor, screenwriter, and composer. Although Carpenter has worked with various film genres, he is associated most commonly with horror, action, and science fiction films of the 1970s and 1980s.Most films of Carpenter's career were initially commercial and critical failures, with the notable exceptions of The Fog (1980), Escape from New York (1981), and Starman (1984). However, many of Carpenter's films from the 1970s and the 1980s have come to be considered as cult classics, and he has been acknowledged as an influential filmmaker. Read more on Wikipedia

John Carpenter is most famous for his work in the horror genre. He is known for directing and writing some of the most iconic horror films of all time including Halloween, The Thing, and They Live.