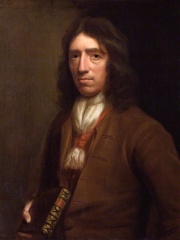 William Dampier (baptised 5 September 1651; died March 1715) was an English explorer, pirate, privateer, navigator, and naturalist who became the first Englishman to explore parts of what is today Australia, and the first person to circumnavigate the world three times. He has also been described as Australia's first natural historian, as well as one of the most important British explorers of the period between Francis Drake (16th century) and James Cook (18th century), he "bridged those two eras" with a mix of piratical derring-do of the former and scientific inquiry of the later. His expeditions were among the first to identify and name a number of plants, animals, foods, and cooking techniques for a European audience; being among the first English writers to use words such as avocado, barbecue, and chopsticks. Read more on Wikipedia

William Dampier was an English explorer and privateer. He was most famous for exploring the west coast of Australia in 1699.