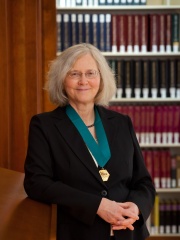 Elizabeth Helen Blackburn, (born 26 November 1948) is an Australian-American Nobel laureate who is the former president of the Salk Institute for Biological Studies. Previously she was a biological researcher at the University of California, San Francisco, who studied the telomere, a structure at the end of chromosomes that protects the chromosome. In 1984, Blackburn co-discovered telomerase, the enzyme that replenishes the telomere, with Carol W. Greider. For this work, she was awarded the 2009 Nobel Prize in Physiology or Medicine, sharing it with Greider and Jack W. Read more on Wikipedia

Elizabeth Blackburn is most famous for her research on telomeres, the caps at the end of chromosomes. She was awarded the Nobel Prize in Physiology or Medicine in 2009 for her work on telomeres.

Among BIOLOGISTS In Australia